It’s been a crazy holiday season and with all the family events, hosting guests, and many many days of baking, I’ve had no time to blog.  I will most definitely be posting some reviews of recipes and restaurant reviews this coming week for things that I’ve tried over the last month.

Also, I may be posting some reviews on the many escapes we’ve been to, but for now you can check out escapegamesreview.com

I personally love croissants, although they are quite fattening.  What is a croissant?  The croissant is a crescent shaped French (Vienna- Style) pastry.  It has many layers and each layer of the dough has a layer of butter; as an outcome, the pastry is super flaky and light.  There are many varieties of croissants, butter, cheese, etc.

Last weekend, as I happened to be a one of the new locations of the Aroma Espresso Bar (inside Markville mall), they had fresh baked, just out of the oven croissants.  My mum couldn’t resist.  We had a full avocado sandwich made with the croissants.  They were heavenly.  Melted in your mouth, crispy, flaky, air-ness.  I was temped to get another, but after finishing half my Mango Kale juice (which btw, was also delicious, healthy and cleansing), I didn’t think I could eat anymore.

The next day when I went into work I was still craving for that delicious croissant, so I bought one from Tim’s.  It was not the same thing in anyway.  I have to be fair, it definitely wasn’t a fresh made croissant, but the density of the pastry just didn’t feel like it lived up to the infamous French crescent bread.

There is a big gap in the price as well, $2.45 at Aroma’s and $1.60 at Tim’s.   I guess sometimes you really do pay for quality, but to be fair, I’m going to do a comparison post later.  It will be fresh baked Tim’s croissant Vs. Aroma’s fresh baked croissant.  Come back soon for the review.

This weekend I was craving French Toast and I went to the trusty Yelp and Urbanspoon sites to look for a place closer to home.  I came across Olde Village Bistro (http://oldevillagebistro.com/).  They are on Hwy 7 and Unionville Main St, just beside the Dominos.

It is definitely a neighbourhood little restaurant that seats, I’d say about 50.  Reading so many good reviews, I was excited to try this local bistro.  They have a 7 page menu, that’s including breakfast, lunch, kids, and drinks, so there are quite a few choices and I could smell the yummy bacon and the fragrant cinnamon as food was being made on the grill.

Here’s what we ordered that day:

As soon as we ordered the drinks, we got them in less than 5 mins., which was great considering they were full house.  The orange juice is a store bought type juice, not fresh squeezed.  The coffee, no idea what brand, but it tasted like every day coffee, so no complaints.  The only thing that slightly bugged me was, although the coffee was bottomless, I was never offered a refill until all the food was cleared off the table and the bills were paid.  I did hear the server ask our surrounding tables if they would like more coffee, so maybe ours was just overlooked.

Unfortunately, we waited about 20 mins for our food and when it arrived, it was just warm. 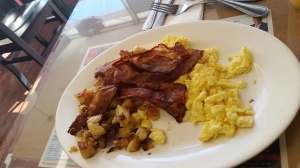 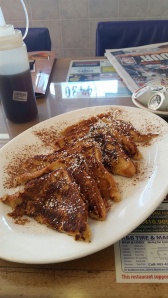 Let’s start with the the Traditional Breakfast with Bacon.

The picture above is exactly how the plate came.  We had not eaten anything, or touched it.  The Traditional Breakfast with Bacon comes with 3 eggs, any style, hash, and of course bacon.  The plate to be honest was underwhelming.  The eggs were fluffy, but because they were scrambled and cut into such small pieces, it just didn’t feel like a hearty breakfast and lacking in the “mouthful” feeling.  The hash was small potato chunks.  You can clearly see it was boiled and then grilled.  Tasted a little bland, no salt or seasoning.  The bacon…Bacon is a super yummy, fatty food.  I know some people love it super crispy, as if it came out of the deep fryer and it just crunches into many pieces, but that is not the proper way of cooking bacon.  At Olde Village Bistro, parts of the bacon was overcooked (super crispy) and other parts were well cooked, slightly crisp with a little chewiness.  It wasn’t anything I would rave about, just an ordinary homestyle breakfast plate that we can make at home.  For $5.99, I guess it was ok.

Now moving onto the French Toast.

As you can see plating looks great.  3 slices of toasts, cut in half, battered/soaked in eggs, and grilled.  It is topped with powdered sugar and cinnamon.  They serve this with syrup.  The syrup is bottled by the bistro, so I’m not sure what it was, but it wasn’t too sweet like hone and not too bland just corn syrup.  The toast themselves were unfortunately also underwhelming.  The crusts were not soaked with egg at all and also a bit hard, not crunchy like it’s toasted, but just hard.  The middle parts of the toasts were sunken in and flat.  They were not fluffy toasts with crispy outside as you would come to expect from a well made french toast, which by the way is extremely hard.  Without the syrup, powdered sugar, and cinnamon, I would not have been able to finish my french toast.  Also with this pretty plate being luke warm, that probably added to the deflation of the bread.

One other side note I have prior to summary is, our bill was passed to our table right after all the food and cutlery were brought to the table.  We had not even started eating yet, nor did we ask for the bill.   Also I did advise the server we had another person that’s on their way.

I was very excited to try Olde Village Bistro based on all the great reviews on Yelp (http://www.yelp.ca/biz/olde-village-bistro-markham) and I was hoping to find a little neighbourhood breakfast/brunch place, since most of the good ones are downtown Toronto.  I’m sad to say, they have not met my personal expectations.  I believe that restaurants deserve to be visited more than once, because maybe they were having an off day, so I will try them again one day soon and hopefully the experience changes.

Olde Village Bistro, will you be Off the List? 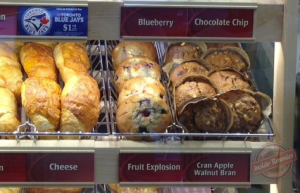 As daily Tim Horton’s goer, I try many of their yummy treats.  Today I decided to give the Cranberry Apple Walnut Bran Muffin a try.  Unfortunately I was severely disappointed.  It could have been the location I go to at work, as I know the products are delivered to us rather than having them baked on location.

Let’s break down the muffin:

It had Oats, Walnut bits, and some visible red which looks like parts of cranberries.  It had that muffin top crunchy but was a bit dry, maybe due to the toasted oats and walnuts being there.  It wasn’t sweet, but also wasn’t lacking flavour. 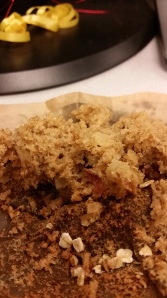 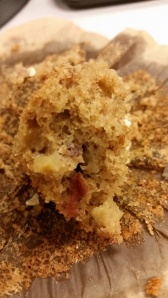 The inside parts of the muffin was moist for a bran muffin, however there were spots that were wet and soggy.  As you can imagine a soggy muffins texture wise and flavour wise doesn’t make sense.  There were some cranberries inside and they seem like they were frozen cranberries as it bled around the muffin.  I don’t mind frozen cranberries, as it’s understandable for fruits to not be available every season.  The issue I had was flavour and texture.  The cranberries were so sour.  They were not tart, they were just sour.  Around the cranberries, the muffin was soggy as well.   The apple bits lacked flavour.  Biting into the bits, you wouldn’t know they are apples.

Bottom of the Muffin: 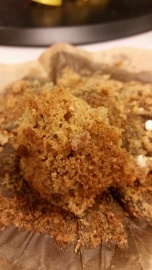 The bottom of the muffin was well done.  It wasn’t burn at all and it came off the muffin liner easily.  There were cranberries and apples on the bottom as well.

In the end, due to all the soggy part, I found the muffin very hard to eat and if felt like it was not a well made baked product.  I do think this can be just the location at my work place but I definitely will not be trying this muffin again at this location.